A while back I had a question asked regarding the differences of 1962 to 1964 Max Wedge intake manifolds. There are in fact differences between the three different part number castings. I am learning more about this type of stuff every time I turn around and had the good fortune to run into a gentleman by the name of Bob Bowers in Half Moon Bay California this year that revealed a boat load helpful information on this subject. He showed me several different intakes and the following is what I have learned so far.

Before we get started, you will notice all three variations of the Max Wedge intake have the same casting number. Previously I listed three different casting numbers. That was a mistake on my part. I used an outdated print source rather than having a reliable source check on the actual different intakes personally. There were different part numbers for these intakes but the casting number was not changed, in spite of the changes to the intake through it's production run. As far as I know now, the casting dates are what puts which intake into what time frame of production. This gets a little confusing though as the earliest intakes I have seen have no casting date at all, whereas I have seen Stage III intakes with April 1963 casting dates and Stage II intakes with casting dates later than that. I can only speculate that there are casting runs being done for future release being done during current casting use runs overlapping at the same time. If anyone knows more about this please write in.

The 1962 Max Wedge intake was the first in a series of intakes that were similar yet different. For 1962, 2402726 was the casting number assigned to this "short ram" or more commonly known as "crossram." I have physically seen three versions of this casting. From a distance they look virtually identical except there are very subtle changes that are visible and as far as I know there were no changes whatsoever regarding performance. The first version of the 2402726 casting had no casting date. The second version was identical with a casting date cast into it. These first two versions had a design integrity flaw that brought about the third version of this casting number. On the front left (drivers side) and the right rear (passenger side) intake bolt access hole formation, the tall side of the wall formation was not reinforced causing the thin wall to crack if the access hole plug is tightened to much. Below are two pictures, one of the front and one of the rear that show this design flaw.... 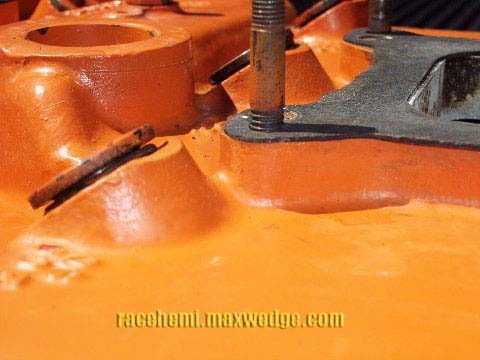 Drivers Side Front Access Hole. Notice the gap between the access hole outer wall and the carb mounting surface wall. 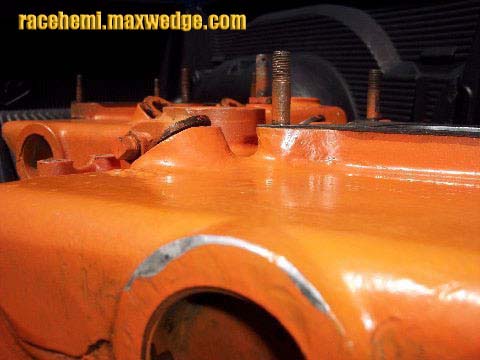 I have seen several of the first two designs being cracked and epoxy glued to seal the crack and prevent a vacuum leak. To remedy this problem the third version of this casting number has a cast-in bridged wall from the access hole wall to the carb mounting stand wall. this is visible from twenty feet away so it is easy to spot. Most likely you will also find a casting date cast in that suggests this third version was first introduced to the early 1963 Max Wedge engine beginning in 1962 and used until May 1963 on the 426 Stage I Max Wedges. In the pictures below you can see how they reinforced this weak area with a thick bridge from the back side of the plug hole wall over to the carb mounting surface.... 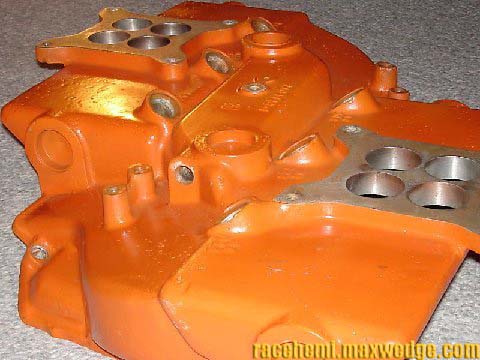 On intake manifolds with casting dates the casting date is located on the raised rectangular pad located on the middle of the intake like in the picture above. The pad date code began with the 1962 second version, with no access hole bridge support like the first casting that had no date code.

In May of 1963 Chrysler came out with the Stage II version of the 426 Max Wedge engine. As far as I know there were no runner configuration changes internally. An article from years ago suggests the same. There was however a change up in carburetion. Part of the new Stage II package was an upgrade from a roughly 600 CFM small air horn Carter AFB (3447) to a larger air horn 750 CFM Carter AFB (3705) carburetor. This larger carburetor had equal size primary and secondary throttle blades. This change in throttle blade size made it necessary to machine larger venture holes in the primary locations on the intake. Here you can see the changed primary holes... 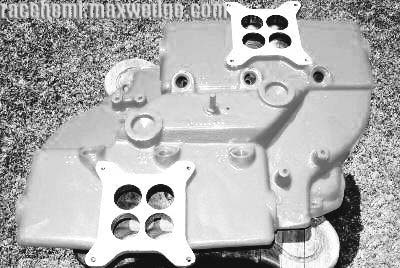 From what I have heard Chrysler wanted NHRA to accept this as a production change but NHRA would not let the Stage II cars race with the new intake/carb set up due to late entry in the racing season of 1963 and not making some production level quota. I do not know this for a fact as I haven't seen any documentation to that fact.

For 1964 there were several changes to the 426 Max Wedge engine. Intake manifold porting was changed and utilized the larger primary venturi holes like the late 1963 version first introduced. This intake incorporated all the improvements and had a subtle exterior finish change that is noticeable at a glance. On the 1962 and 1963 intake castings there was an abrupt drop. This "abrupt drop" is in reference to a feature of the intake casting. Picture this if you will. The machine surface where the carburetor is mounted is a horizontal plane surface. It drops down to a cast non machined horizontal plane surface that runs in front of and behind the carburetor plane. As this plane approaches the front of the intake on the drivers side and rear of the intake on the passenger side you will notice an angled plane that runs across to the other side of the intake, left to right. This sloped plane goes from the plenum under the horizontal area over to the cylinder head intake ports on the opposite side in the form of runners and is does this on a sloping angle due to the height of the raised plenums under the carbs. Where the horizontal surface of the plenum meets the sloping surface of the runners there is a transition point in the casting. On the 1962 and both of the 1963 version intakes this transition is an abrupt tight radius drop off. If you look at the pictures of the two intakes above you will notice a shadowed area that looks like a short wall between the horizontal and slope surfaces. In the pictures above this would be the shadow line just under the first access hole in the upper right of the pictures and runs out to the leading edge of the intake. Whereas this looks like a 90 degree vertical drop it is actually likened to a 90 degree radius of the diameter of a penny. If I had a straight on picture you would see the roundness of this drop off edge. That is what I mean by an abrupt drop.

In the pictures below you will notice a blended drop transition. This was first incorporated on the 1964 Stage-III intake manifolds which was a result of internal modifications for the 1964 engines that increased favorable flow characteristics..... 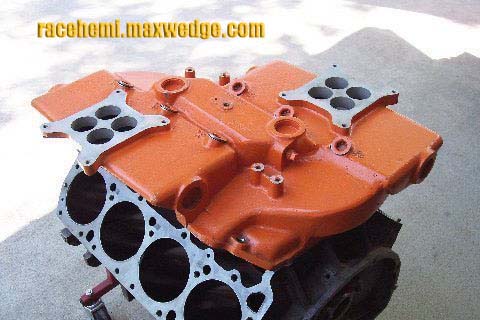 If you scroll up and down and compare the pictures you will see this "abrupt drop transition" compared to the "blended drop transition." Once you have that figured out you can spot the different intakes on engines at shows very easily. Only the 1964 Stage-III cars should have the blended drop. Never earlier than 1964. Fact, not my opinion. I have heard in the past regarding all the changes the Max Wedge engine went through over the three year run of these magnificent engines, the best heads were the Stage II versions with little difference in flow regarding the drag package engines but the NASCAR engine showed a 40 horsepower gain using a single four barrel carb using the Stage II heads over the Stage I heads. The best intake was reported to be the Stage III version citing interior runner modifications in the casting. Recently another gentleman said he has seen all three variations of intakes with no casting dates on them. If anyone has original technical documentation regarding all of the production changes I would love to see it.