The 1964 Race Hemi crossram intake manifold, part number 2468418, casting number 2468045 is a one piece cast aluminum manifold. Here are some pictures of an original intake with the carb adapter plates and linkage in place. This intake has been polished after the fact. They were a natural cast finish and painted engine color when originally installed. 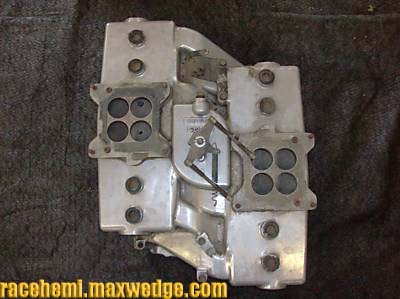 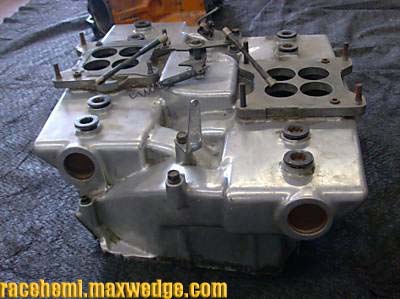 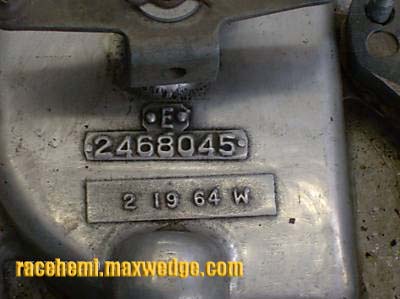 The casting date on the picture above is not necessarily the only casting date you might find so don't let the date be too big of a deal. In cases of extremely accurate concurs restorations it would be preferred that the casting date precedes the build date of your car.

To describe this crossram intake manifold best I refer to the text in the 1964 Dodge 426 "HEMI-Charger" owner's manual, publication number 81-270-5265. Boy, you have to love the way engineers talk!

"A new ram tuned intake manifold similar to previous 426 manifold is used. It has no provision for carburetor heat. Intake passages are larger than in previous types because of increased engine breathing requirements. The manifold fits between the rocker covers and serves as a tappet chamber cover. It is tuned to increase output in the higher speed ranges (above 4000 r.p.m) and has generous tapered branches."

I don't think I could have described the design of this intake better.

Like on the Max Wedge intake manifolds there are intake manifold bolt issues that require access holes to reach these bolting areas. This intake utilizes the same intake bolt hole plugs that were used on the Max Wedge crossram, except there are eight bolt hole plugs used (four per side) instead of six (three per side) like on the Max Wedge crossram. This is because the Hemi intake has eight bolts per side instead of the usual four per side like the Max Wedge. These bolt hole plugs only cover half the bolts per side on a Hemi. To reach the other four bolts you have to access them from under the carburetor inside the plenum on each side of the intake. This is achieved by removing the bolt on carburetor mounting surface spacer to get inside the plenum. Then you go straight down to the other four bolts. Here is a great picture of an A&A Transmission reproduction intake with the carb spacer plates removed. This reproduction manifold looks exactly like the original right down to the casting numbers. 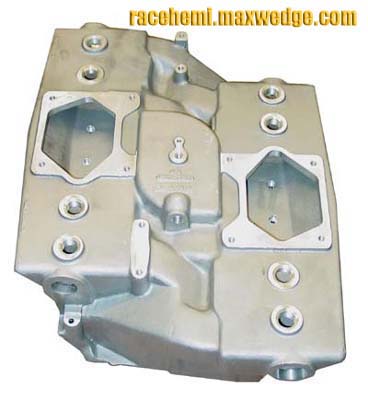 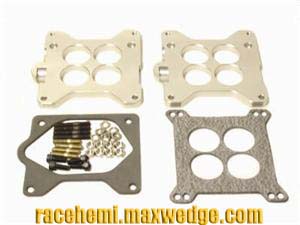 Crossram intake manifolds used on the 1964 and 1965 Race Hemi engines are pretty much the same but there are differences. From a visual standpoint they look the same except a 1965 crossram has additional casting holes that require freeze plugs. These are easy to see as they are on top of the intake manifold in the center horizontal plain on top of the intake. There is one in front of the linkage post and one to the rear of the post. These plugs are not present on a 1964 manifold. Here is a picture of a reproduction 1965 magnesium crossram intake made by A&A Transmission. This intake is exact in every way to an original down to the casting numbers. 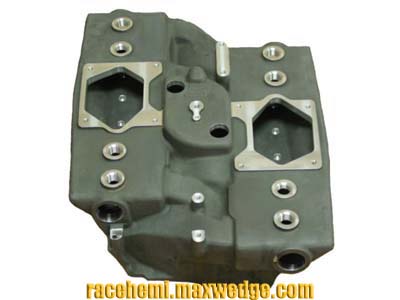 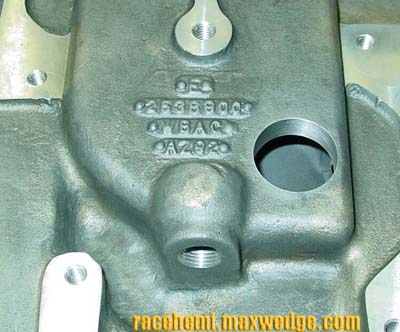 Notice the holes for freeze plugs on the center island plain. These are not found on 1964 Hemi crossrams. I do not know if the WBAC in the picture above is a casting date or a foundry remark but it is consistent with original casting codes. Rick Allison at A&A said the AZ92 code has to do with the type of magnesium being used which is the highest grade of magnesium and very expensive to use. The darker color on the 1965 intake is from the magnesium alloy used in the casting. As unsealed magnesium is exposed to oxidation the color gets darker. The A&A intakes are sealed with a Dow coating process prior to prevent further oxidizing. After all of the machining areas are performed A&A sprays WD40 on the intake. The WD40 soaks into the raw machined magnesium to prevent oxidation on the machined surfaces. The A&A intakes will have to be cleaned thoroughly prior to painting to get the excess WD40 off. I mention this A&A information because the original intakes might have used a similar process back in the day.

The primary reason for the switch from aluminum to magnesium in 1965 was to loose as much as ten plus pounds of weight over the aluminum 1964 casting. Just like the 1964 aluminum intake the magnesium intake uses the same carb adapter plates and mounting hole plugs.

As time marches on these crossram intakes continue to be in demand in racing applications and more so in restorations and recreation cars. Because of this high demand Chrysler came back out with a newer version of the Hemi crossram. This newer version is cast in aluminum and has removable plenum tops to access the mounting bolt holes and make it easier to do internal modifying of the intake. The carb mounting plates are no longer needed as the mounting surfaces are cast into the new plenum tops. I haven't heard of any rave reviews of this new intake but I have heard it weighs about twenty pounds more than the original aluminum crossram and roughly thirty pounds more than the original magnesium version. The new intake is also taller than the originals and with the thicker aluminum walls and it retains heat badly. From an originality appearance standpoint it looks aftermarket when you are trying to make a car look period correct. Here is a picture of the newer Mopar Performance Hemi crossram intake manifold so you can see how comparatively different it looks. Notice the addition of plenum top plate bolts and the lack of mounting hole plugs. 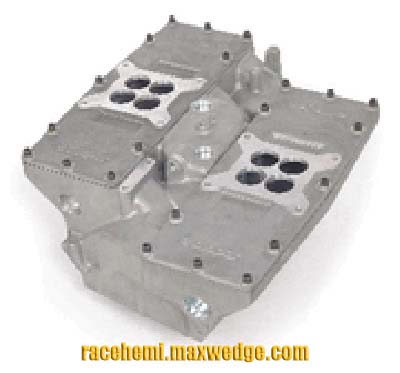 This newer intake is a noticeable deviation from the original style when you are trying to make a car look correct. If you don't care how accurate your car looks compared to an original car this intake will work and cost you a lot less money. In my opinion go for an original or the A&A Transmission reproduction. A&A's look exactly like an original intake and all of the factory linkages work on it perfectly. Too often the money saved with a lesser quality or inaccurate appearing part is greatly out weighed by the difficulty of getting the cheaper part to work and comments offered by us know-it-alls when looking at your car. After a while it will drive you crazy and you will wish you had gone the extra bucks up front. It's important to mention that some reproduction parts have become so accurate they can often be difficult to tell them from originals. Don't be overly concerned about buying reproduction parts but look them over closely and compare them to original parts whenever possible.

Now you know what I know about Race Hemi crossrams. If anyone out there knows of something I might have left out, please don't hesitate to write me.

Note:
The specific mention of any companies in my topics is not paid advertising by said companies. I mention them only because of accuracy or in some cases non-accuracy of their product in comparison to original parts and the technical information they might offer on the subject up for discussion. It goes without saying that their efforts to provide quality parts that benefit the hobby is greatly appreciated.