Max Wedge cars had two types of air filtering systems. If your car was a steel front end car it came with air cleaners like standard production cars did. This air cleaner system consisted of two separate air cleaners (one per carb). Each air cleaner had a steel base, a filter element and a steel lid. The 1962 and 1963 Stage I Max Wedge engines used Carter 3447 carburetors which had the smaller size air horn opening so the steel base was made to fit that specific air horn size. The 1963 Stage II and 1964 Stage III Max Wedge engines used the new larger CFM Carter 3705 carburetors which had a larger air horn opening so the steel bases were made to fit the new larger air horn size. Here is a factory press release photo that properly shows the difference in the sizes of the bases. 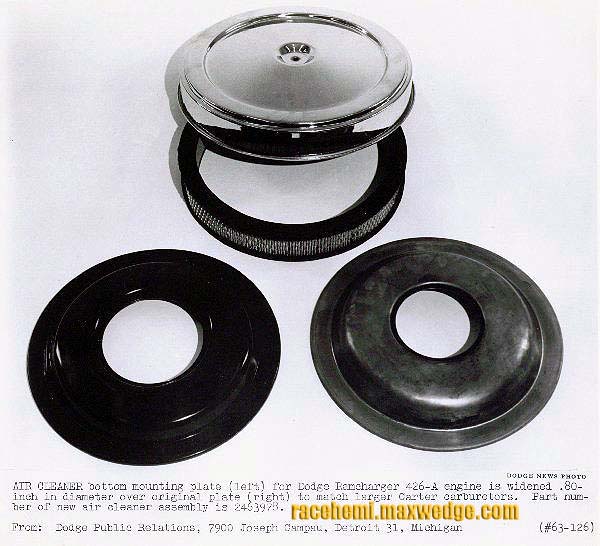 I only mention this as you need to be aware of this fact when buying air cleaners for the size of carburetors you are using. Be sure to ask the seller what his size air cleaner bases are at the carb opening. Measure your carbs to be sure you are buying the right type you need.

Here is a little better detailed picture of what the air cleaners look like.... 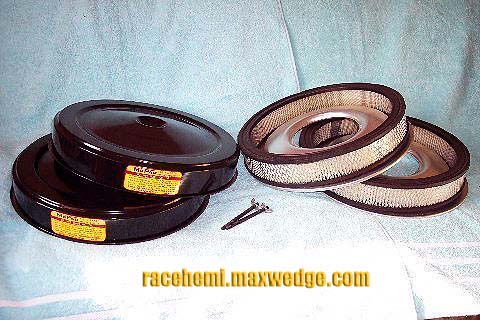 This air cleaner system is available in reproduction form and is exact in every detail to the original factory air cleaners. 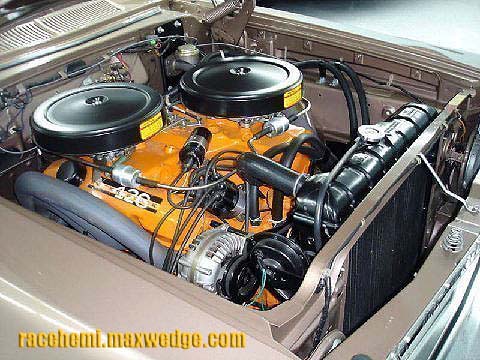 This is an original 1963 car equipped with 3447 carbs. Notice the fuel line routing. 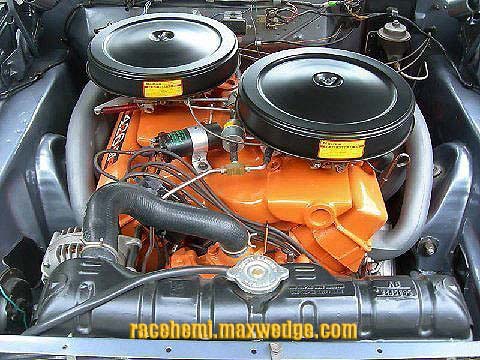 This is an original 1964 car equipped with 3705 carbs. Notice the fuel line routing.

The original Mopar part number for the Max Wedge air filter element is 1851493 but they were serviced aftermarket by several vendors as well. The Fram part number is CA170PL . You can get this crossed over at stores like Car Quest and Napa to their part number off the Fram number. I don't think you can get the Fram anymore but the Car Quest and Napa stores have a current offering. If you get stuck there I have about 24 of them here. I believe the going price at the stores is about 15.00 per filter, at least that's what I remember them being last time I bought some. If you find NOS Fram's you will pay a fortune for them as most people think those were the correct type. Truth is they are not. Old Frams have the orange rubber with round hole mesh, much like the original street Hemis and Six Packs. That's why most people think the Fram CA170PL is correct. Back in the day that's what you got as a replacement as Fram was a big aftermarket supplier much like they are still today. Original filters however had black rubber with either a rectangular wire mesh or a diamond wire mesh. Either one is correct as I have seen NOS original examples of both in original Mopar part numbered boxes. Of the original filters I have seen the paper behind the mesh is more of a vanilla creme to slightly yellowed color where the replacements are a stark white paper, but that's splitting hairs. Chances are the originals have changed color as they are pretty old to make comparisons with today. Here are examples of NOS original Max Wedge air filters. 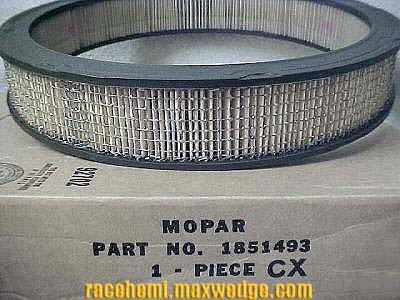 The filter above is probably an early version of this part number with the rectangular wire mesh. This 18----- series part number indicates the year of origin for this part number is 1958 so you can imagine it was used on some application long before the Max Wedges. 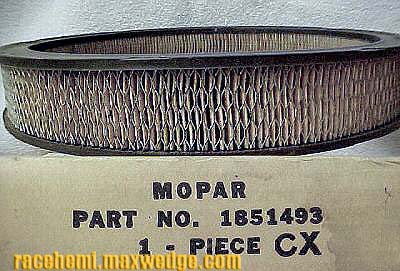 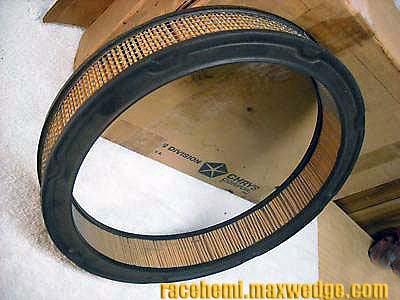 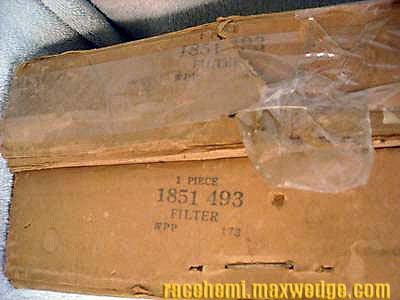 The two pictures above however show the rectangular mesh in boxes made from 1964 and newer. This is why I say either type of mesh should be okay, even in O.E. Gold Certification judging. Notice the color of the paper in the element above compared to the other two examples. Again it's hard to say if this difference in color is an age issue or a difference in the paper used during manufacturing.

The replacements you get today from Napa or Car Quest are black rubber with diamond mesh. NOS original filters are very expensive today and not worth the price unless you have an original car and you are going for O.E. Gold Certification Judging. Stick with the replacements as they are close enough and a lot less money. Most people don't know this little detail as you cannot see the filter once it's in the air cleaner anyway.

If you had the aluminum front end you had a scoop which used velocity stacks. Theses stacks had no paper filter and only a wire window screen type mesh to keep the big stuff out of the carbs. This type of filtering did nothing to keep fine dirt from getting sucked in but you generally didn't encounter dirt on a race track environment with the exception of the pits so this wasn't much of a concern to racers. Here is what the velocity stack filtering system looks like... 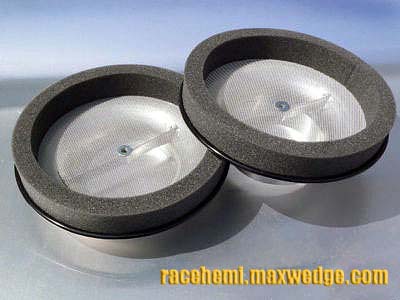 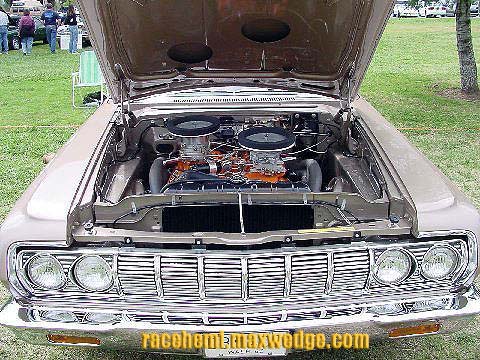 This is an original 1964 Aluminum front end car with velocity stack filtering system. 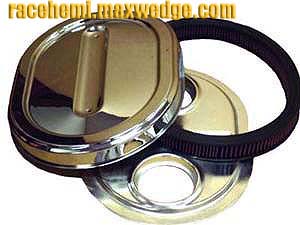 Notice in the picture above the air filter is a K&N gauze type filter. To my knowledge there are no current air filter manufacturers offering a paper type filter for the Race Hemi air cleaner like they originally used. As far as I know K&N is he only replacement manufacturer for this filter today. The original Chrysler filter part number was 2468987 which crossed over to a Fram CA132. Here are a couple pictures of an original filter. 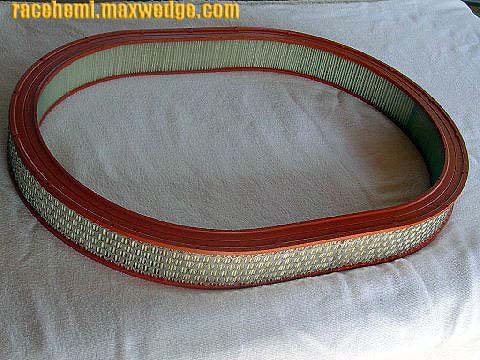 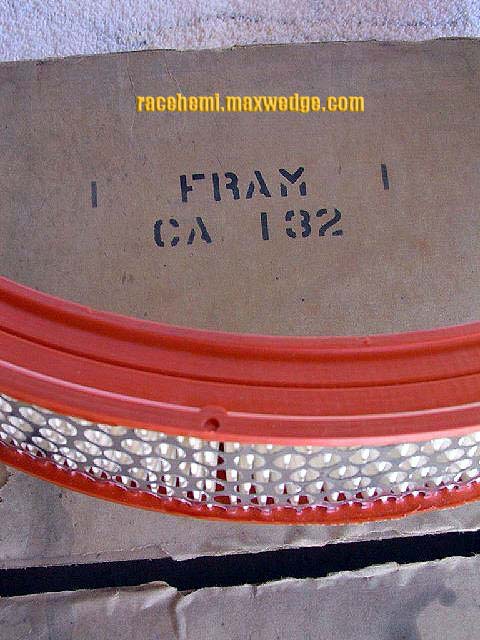 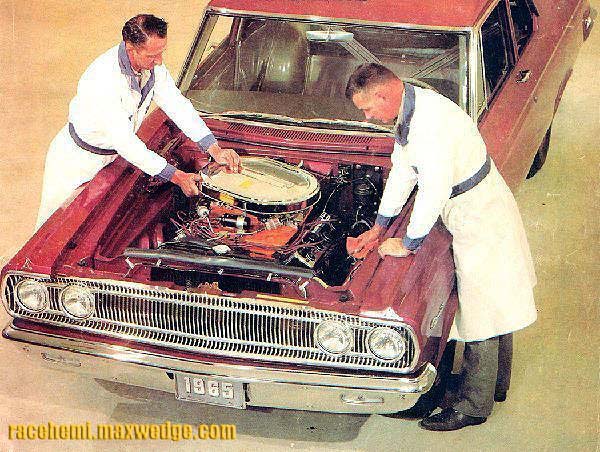 This is an original picture of a 1965 Coronet Hemi car. The 1964 Hemi cars used the same air cleaner assembly. 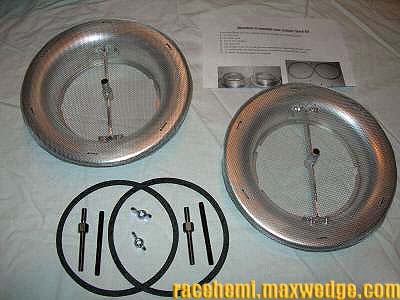 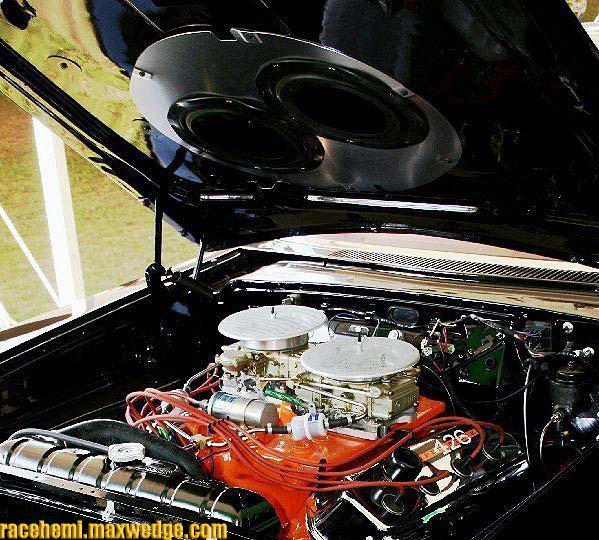 If anyone out there has information I might have left out please let me know and I will update this page. The goal here is to be as informative and accurate as possible for the benefit of owners and restorers.

Note:
The specific mention of any companies in my topics is not paid advertising by said companies. I mention them only because of accuracy or in some cases non-accuracy of their product in comparison to original parts and the technical information they might offer on the subject up for discussion. It goes without saying that their efforts to provide quality parts that benefit the hobby is greatly appreciated.