To Mourn A Good Man

If you are into Max Wedge and Race Hemi cars and engines you have come to the right place just like before. I have been working on new pages for the topics you can find in the left column of this page. As time goes by I will have some more pages to post that hopefully will be of help to you on these great engines and the cars they came in. For now though I would like to tell you about a good man that we all just recently lost. I don't usually talk about people on this site but this man is definitely an exception to the rule.

I could ask a thousand of you Max Wedge and Race Hemi guys if you have ever heard of Dick Towers and most all of you would say you have never heard of him. Dick would have been happy to hear that. Not because he was a recluse that didn't want to talk to people but more so because he didn't want his love for the cars to get lost in his being famous like what happens to so many others. Dick had this reputation for being an old grump that didn't like being approached and talked to. That was my first impression too. My first impression couldn't have been more wrong. Dick was a real nice guy and was a big help in setting me straight on all things Race Hemi. I once told Dick how I had mentioned to Dave Bell, the guy who makes this website possible, just how nice of a guy Dick is. Dick fired back with "Don't say things like that about me. It will ruin my reputation". I know he was only kidding but it shows just how modest this good man really was.

I only use the words "Good Man" because I don't think Dick would ever want to be called "Great" so I honor this "Good Man" by keeping him real just like he really was. At this point many of you are still thinking "who is this Dick Towers guy?". In the Race Hemi world there is what I would call the inner most circle of the most knowledgeable people in the world regarding Race Hemi super stock and pro stock cars. They would be Jim Kramer, Dick Towers, Mike Guffey, Mark Janaky and Steve Atwell. These guys have forgotten more about Race Hemis than the rest of us will ever know and right there in the thick of it was Dick Towers. If you think of this inner circle as a ring on a tree they would be the core. To a lesser extent you would have the Pete Haldimans, Reed Koeppes Jeff Pughes and Jim Schilds of the hobby in the rings around the inner circle. Somewhere out near the bark ring would be the rest of us. Jim Kramer is probably the most approachable on the inner circle as he has a parts business, but the rest of them have stayed out of the limelight rather well. Dick Towers was the best at being a very private man. Sure Dick wasn't very approachable for the most part of his life because he was too busy consuming himself in the world of Race Hemis. I was fortunate to spend a couple days with Dick at the hospital just before he passed away and in spite of his situation he was still talking about Race Hemi stuff. That shows just how much he loved Hemis.

If you had an opportunity to meet Dick he was brief with conversation and came across like he wasn't interested in talking to you. That was my first impression. In the last years of Dick's life he really opened up and started having fun meeting new people. He was still very protective of what he knew but he was willing to help you if he could. Dick would never admit this but he was a really good guy. If he liked you he would go out of his way to help you.

You might not know it but Dick Towers was a big influence in getting all of those super stock and pro stock Hemis to attend Fred Englehart's show in 2006. Dick, Jim Kramer and Mark Janaky personally called the guys with the cars up and that was all it took. If one of these guys called you, you had best show up. It was incredible! Over 60 original factory super stocks showed up for a show in the middle of nowhere with some of the most impressive cars you could imagine. After that show Dick Towers and Jim Kramer decided they had to do that effort one better. I would imagine by now all of you heard about the All Hemi Reunion in 2008 that was held at Quaker City Dragway just outside of Salem, Ohio. That show was the doing of just two people, Dick Towers and Jim Kramer. They didn't put that show on to make money; in fact they lost a lot of money. There will never be a show like that again and calling it the Woodstock of Hemis couldn't have been more true. I remember standing near a guy at the Reunion under one of the tents. He was on the phone telling someone that he didn't care what the guy on the other end of the phone was doing to drop everything and get his butt on a plane to Ohio. I am pretty sure that all of us that attended that show felt that way.

If anything special happened that had to do with Race Hemis you can bet Dick Towers was in there somewhere. Dick knew everyone that was ever anyone and he never let it go to his head. That's the kind of guy Dick Towers was. Although I was introduced Dick by Pete Haldiman several years ago I only got to really know him (thanks Reedo) just a few years ago but will always have him in the top ten best friends ever that I will ever know in my life. He became my mentor and best friend just as fast as snapping your fingers. We talked nearly every week and discussed some of the way coolest stuff. A few years back Dick put out Volume One of Drag Sport Illustrators that was going to be two or three books in a series that discussed the history of the original pro stocks. If you don't have this book yet you had best find one of the few copies left. Dick had finished Volume Two but had not had the chance to get it to print. I hope this still happens and his son Richard is the guy to get it done. If you want to acquire a copy of Volume one let me know and I will see if I can get you hooked up.

There is so much more to say about this man but I know about now Dick would be telling me to tone it down. Dick is survived by his wife Shirley and son Richard. If any of you have fond memories to share with his family or you just want to send your condolences please send them to me through my contact page and I will see that they get them. I know Dick will be missed by the many people that did know him. For those of you that didn't know him I hope you at least caught glimpse of one of the best people you never knew. I know I speak for all of us when I say Dick will be missed terribly. 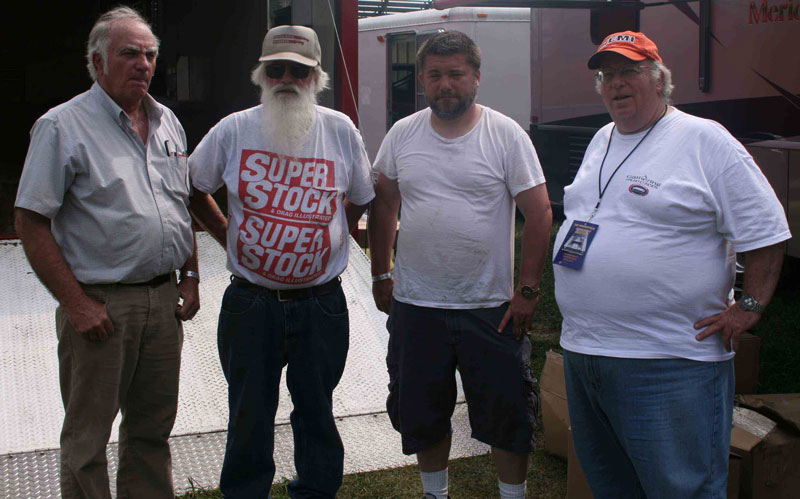