From time to time I am asked about Max Wedge cylinder heads. Which heads are for 1962, which ones for 1963? What about 1964? The answer is fairly simple but there are things to look for.

This was the first year for the new Maximum Performance big block Chrysler cylinder head. The new head has a noticeably taller and wider intake ports that provided much greater intake port volume over the current standard production head offering (approximately 25% more volume). Another change from the standard head was the removal of the intake manifold heat cross over. According to the 1962 Dodge salesman's "413 V-8 HIGH-PERFORMANCE ENGINE PACKAGE" booklet this removal was for "greater volumetric efficiency under competitive conditions." In a Chrysler internal paper it says this increased efficiency is due to less heat transfer due to the removal of the heat passage. This new ultra high performance head had a 2.08 intake valve and 1.88 exhaust valve which was 1/4 inch larger than current standard production heads. This larger exhaust valve required a machined clearance to be done to the top of the cylinder bore. These heads flowed like monsters and with the new crossram intake manifold with staggered two four barrel carbs made these powerful 413 engine nearly unapproachable on the strip. Like the current standard heads these Max Wedge heads featured a four bolt valve cover. The head casting does not have cast in stands for the rocker arm gear, rather it has machined pads for aluminum rocker shaft brackets to hold the rocker arm shafts. Here are some pictures of a proper unmolested original 1962 head... 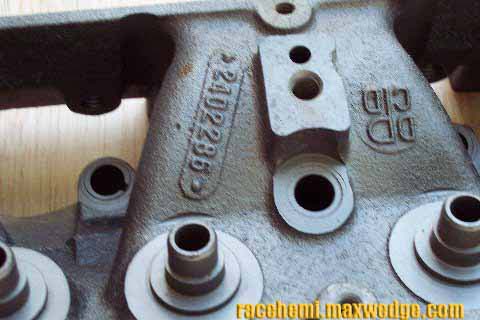 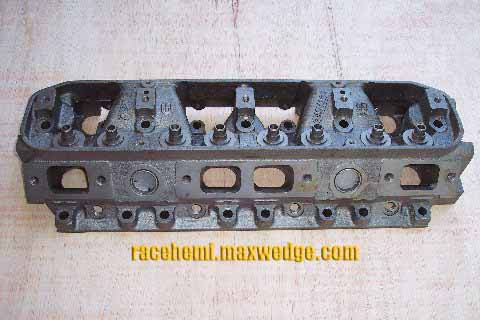 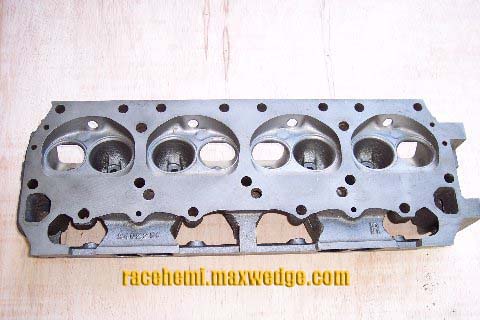 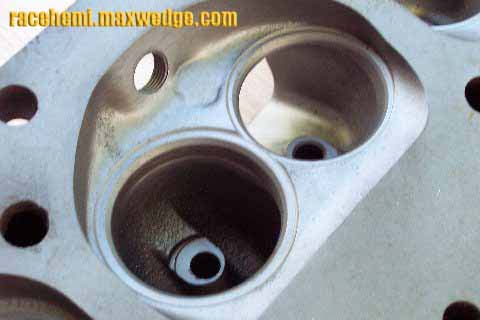 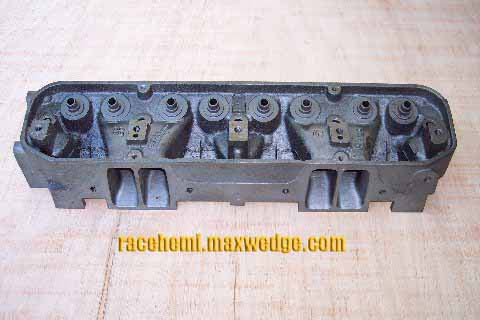 For 1963 Chrysler upped the cubic inches of their Maximum Performance 413 to 426 inches. This newer bigger engine used the same exact cylinder head they used in 1962. There were no casting changes regarding basic casting, port size or machining. Everything bolts up the same and fits exactly like the previous year. Again this head uses the four bolt valve cover with aluminum brackets for rocker shaft mounting. Why they changed the part number I cannot say. If anyone out there knows the reason for the part number change please write me.

In the late 1963 production period there were changes made to the existing Max Wedge Stage-I cylinder head. The casting itself shows a slight casting change at the deck surface where there are reinforcement bridges added to the sides of the intake port runners out to the existing port face bridge at the deck surface. I haven't found any remarks regarding this casting change but it is obvious that these new bridges add strength to the casting for better head gasket sealing. The more important changes had to do with the machine work done to the castings. There were two new machining additions. The first change was to * "reduce the valve seat approach angle inside the intake port from 15 degrees to 0 degrees. This increases the maximum air flow capacity through the valve seat area." The second change * "provides a machined relief in the wall of the combustion chamber, adjacent to the intake valve, to reduce temperature buildup and restriction of the incoming fuel-air mixture." These changes improved air flow and overall performance of the head. Several years ago I read a paper that suggested there was no performance improvement to the engine performance regarding the drag package engine but these machining changes did improve performance on the NASCAR single four barrel engines by as much as 40 horsepower. I have never seen any other paperwork suggesting such an improvement in horsepower so I cannot say this statement is correct. The Stage-II cylinder head used the same four bolt valve covers as before along with the aluminum rocker shaft brackets. Here are some pictures of an original Stage-II cylinder head.... 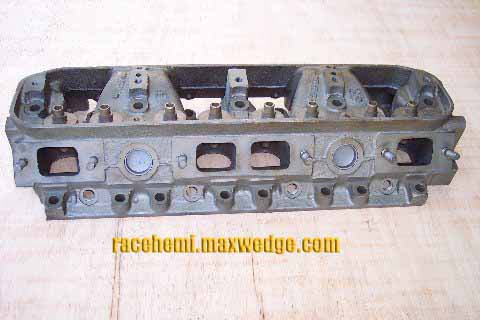 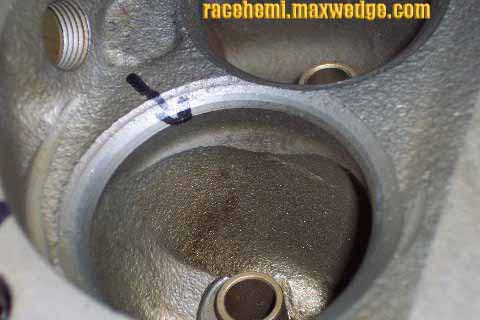 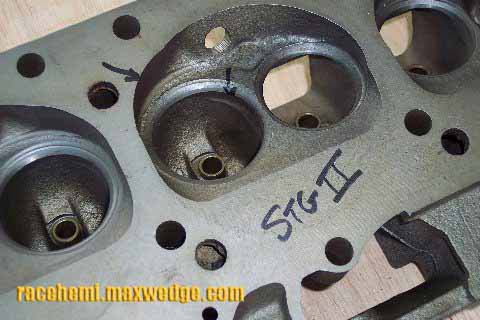 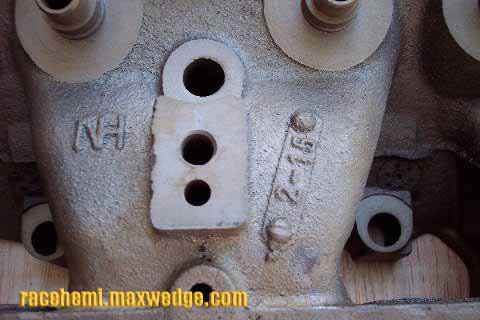 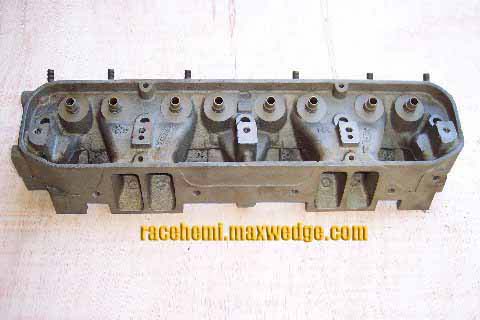 I should note that regarding part number and casting number for the Stage-II cylinder head, one source states the Stage-II head was part number 2406754 with a casting number of 2463209. My Chrysler internal bulletins indicate the Stage-II utilizes part number 2463208. In all of my research I have yet to find a 2463209 casting. All of the Stage-II heads I have seen continued to use the 2402286 casting. As for the additional reinforcement bridges at the intake port deck surface, I cannot say for certain when these reinforcement bridges were added to the 286 castings. For all I know they could have been added during the Stage-I cylinder head production. If anyone knows please write me with your findings. Stage-II engine production began May 31st 1963 and made it into the cars around June 17th, 1963 for Dodges and June 21st, 1963 for Plymouths.

The Max Wedge cylinder head 518 castings for 1964 had only a few changes incorporated into them over the 1963 - 286 castings. The more notable changes were the addition of two more valve cover bolt areas for improved gasket sealing. The other notable was cast in towers for rocker shaft positioning. These changes were incorporated across the board into big block cylinder head castings including standard engines from 1964 to the end of big block cylinder head production. Along with these casting changes the Stage-III cylinder head included the machining improvements that were added to the Stage-II heads in the late 1963 production period.

Below is a newer Mopar Performance head but for visual purposes it is very close to the original casting from this vantage point. Notice the cast in rocker stands and six bolt valve cover configuration. It is important you know the difference between original max wedge heads and the newer replacement heads like below. Only replacement heads have "MOPAR" cast onto them like the head below or have an "M" at the end of the casting number. Also, no original heads have pentastars cast onto them either. Not all recent replacement heads have all three of these "tell's" but they always have one or two of them. Look out for these identifiers when buying heads represented as original 62 - 64 castings. There are guys throwing these replacement heads on sites like ebay claiming they are original vintage or NOS original period heads to scalp unsuspecting buyers. I had a very good friend get taken like this to the tune of 2500.00 for a pair of heads you can buy today for half that or less. I warned the guy three days before his auction ended about this fact and he made no attempt to pull the auction or add information to his listing. 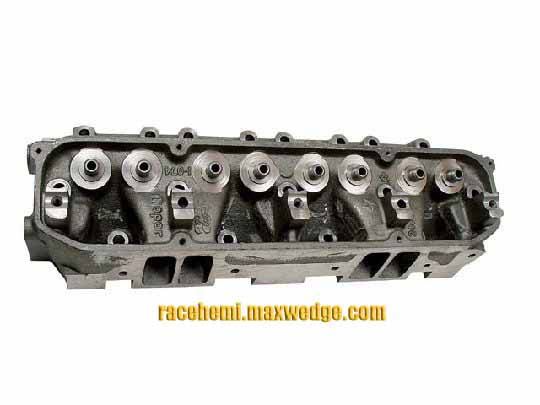 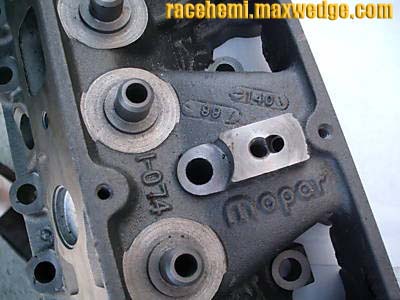 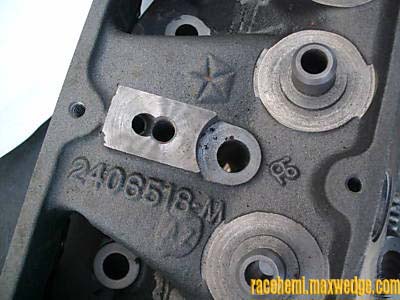 Like I said before, the first picture of three directly above is very close to an original 64 vintage Stage-III head so you can see the cast in stands and six bolt valve cover configuration. If you then look at the bottom two pictures you will see casting marks only on replacement heads made roughly in the last four years or so. Notice in the bottom two pictures the lack of cast in stands. These replacements came in a couple of different configurations so be on the look out when buying what is represented as original from back in 62 - 64. These new heads will work just fine although they don't flow as good as the originals out of the box without some porting work. If I get a chance to get some good pictures of an original Stage-III I will add them later.

Conventional wisdom today is that the 1.88 exhaust valve was to big and restricted the intake valve size from going bigger for improved flow. Today the hot set up for racers is the original max wedge port size with a 2.14 or 2.18 intake valve and 1.81 exhaust valves. This also a more favorable valve combination if you are building a large cubic inch stroker.

Note: * - the remarks above accompanied by the preceding * regarding the Stage-II cylinder head improvements were taken from an internal Chrysler "Production Information Bulletin" dated June 13th, 1963 (pages 4 and 5).