For the most part 426 Hemi cylinder heads are all pretty much the same. They are interchangeable from 1964 to 1971 but there differences that become important regarding performance and appearance that you might want to take note of before opting to buy a the 1966 and later factory or aftermarket modern heads versus original 1964 or 1965 heads.

1964 was the first year for the 426 Hemi so the cylinder heads had what was the first applied design for the 426 Hemi. This design was referred to as the "K" Hemi head. Like the later 426 Hemis this head design had domed combustion chambers and used the same valve arrangement used in the 1966 and later street style heads. The K head used the same type rocker gear, head gaskets and intake gaskets as well but the valve cover was a little different. The K head has a curved area in the casting for the distributor clearance which makes the valve cover gasket surface a difference shape compared to the 1966 and later heads. Here are some pictures of a 1964 A864 426 Hemi "K" cylinder head. 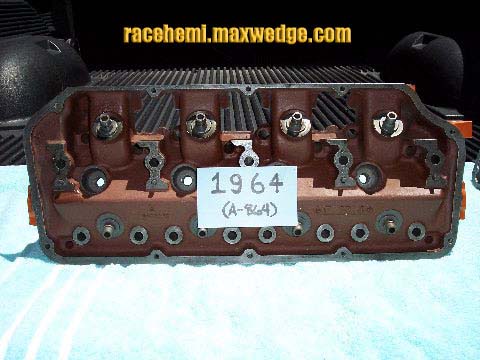 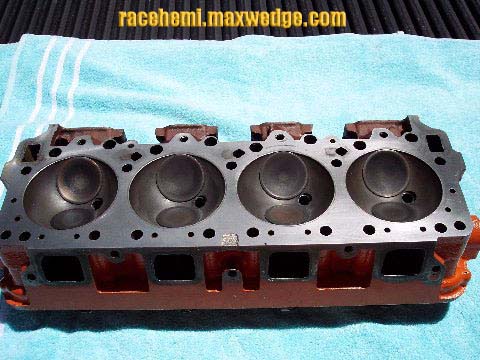 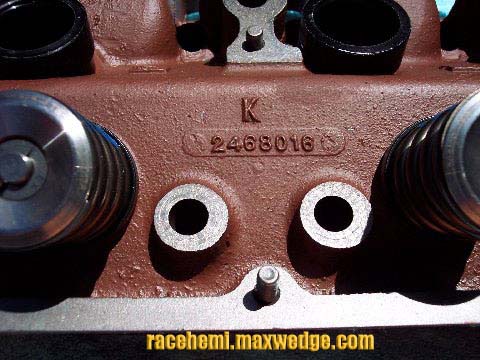 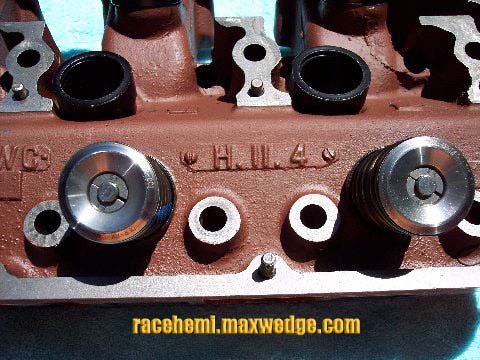 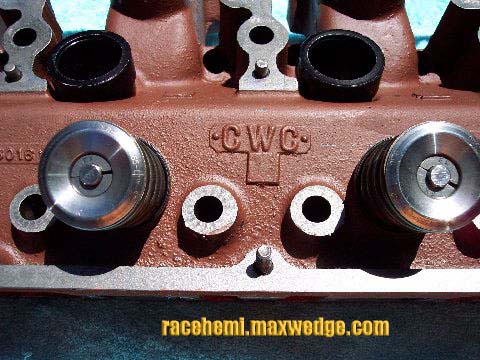 The 1964 K head is cast iron.The intake ports are similar to the later heads but they have more CC volume which makes them the best flowing heads of all the factory 426 Hemi heads. There were a few casting revisions done to the 1964 K heads during their production run but there are no exterior appearance differences that I am aware of. The most noticeable revision is the main water inlet and outlet access holes at each upper end of the combustion chamber side of the head. I have seen round type inlet and outlet holes on some castings and a more rectangular type on others. Here are a couple examples. 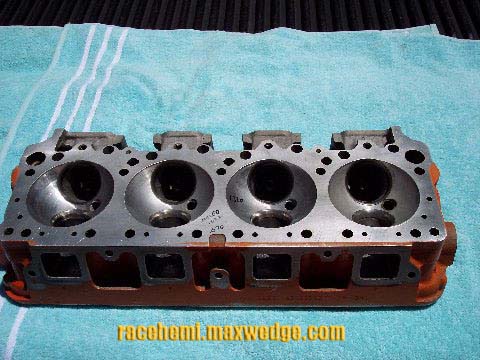 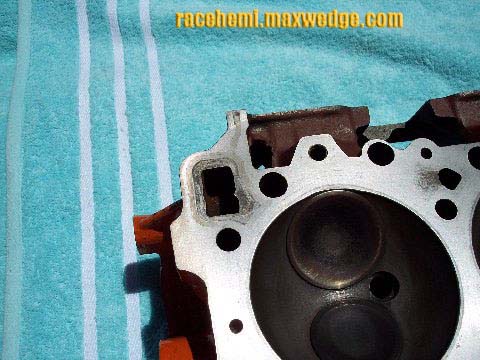 I don't know which is earlier or later in type at this time so I do not know that there is an advantage from one to the other. To be on the safe side you might want to make sure you use two of the same type inlet/outlet castings to eliminate any suspicions of a problem that doesn't exist in this area should you have heating problems. There probably isn't much difference anyway but why make yourself unnecessarily nervous. Stick with one type or the other.

The 1965 Race Hemi head still utilized the same "K" head design as used in 1964. The most notable difference is the 1965 K heads are cast in aluminum instead of cast iron. This change in material made the 1965 heads approximately forty pounds lighter per head. That's an eighty pound weight savings over the front end compared to the previous year. Here are a few pictures of the aluminum 1965 A990 426 Hemi "K" cylinder head. 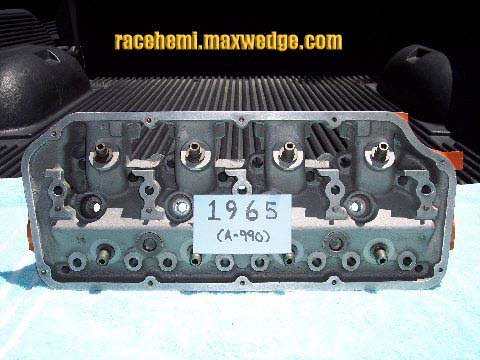 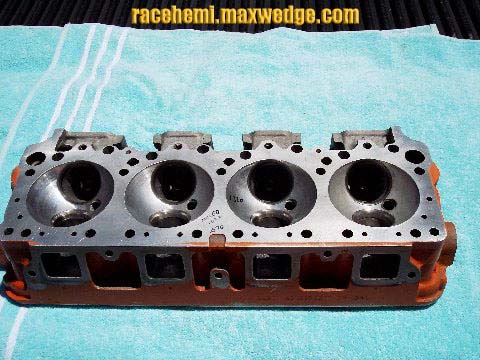 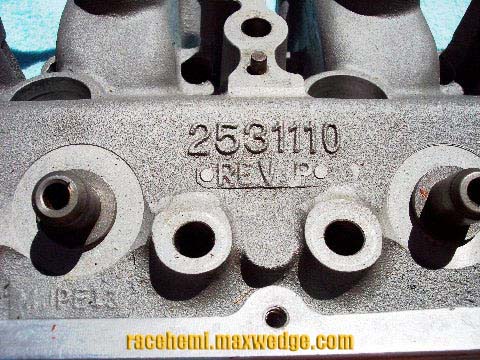 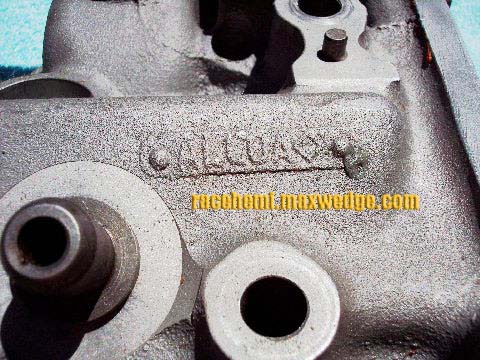 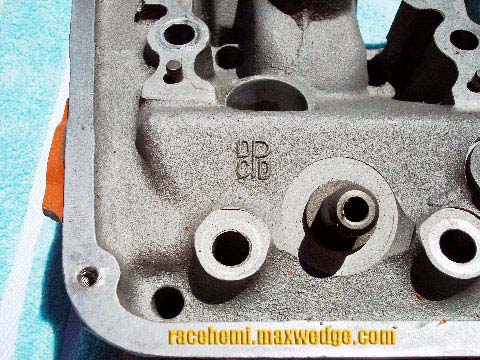 The 1965 K head is pretty much the same in performance and appearance as the previous year but there are identifiable casting changes. In the Aluminum K head there are reinforcement rib changes and a casting hole at one end of the exterior on the head that wasn't present on the iron K head. This hole has a formed boss around the hole. The hole is fine threaded and has a square head plug screwed into it when the hole is opened up to close off the hole. The hole in this head is not open at its depth but I have seen others that are opened up. I don't know what this hole is for as they are usually plugged off. When the heads are mounted onto the engine you can see this plug on the drivers side head facing forward and probably not so much on the passenger side head as it faces the firewall. Here is a close up of this casting change features on the aluminum heads. 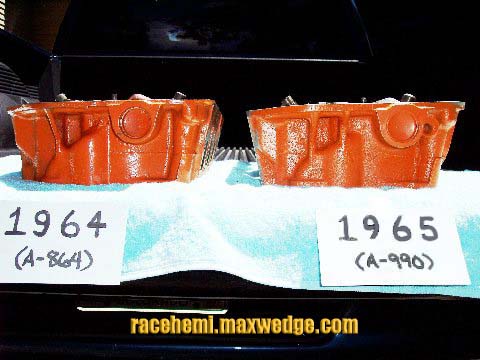 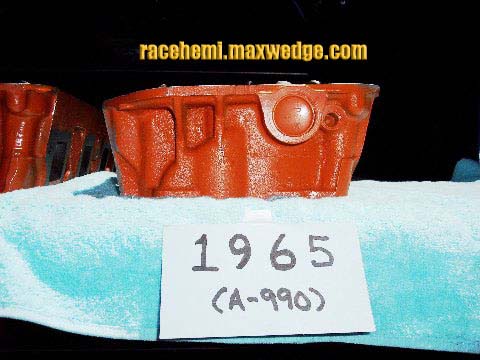 Notice the cast-in hole just to the right of the freeze plug. 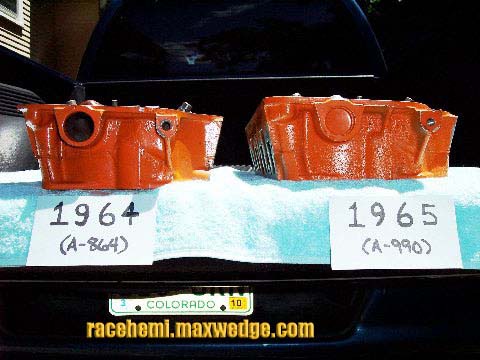 Earlier I mentioned the curve in the head casting that is different to the later head design used on the 1966-1971 Street Hemi. Here is a comparison of the difference. 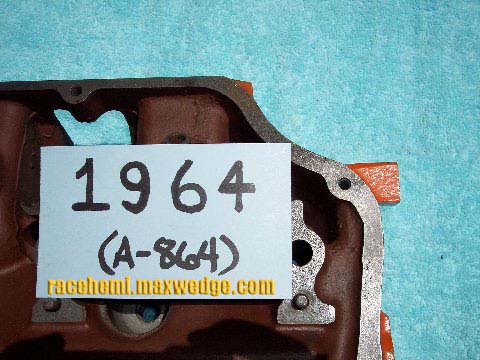 Notice the curve in the head casting pointed out by the cue card. also notice the difference in length of the alternator bolt support tab. This is not a photo trick, these tabs are different in length. 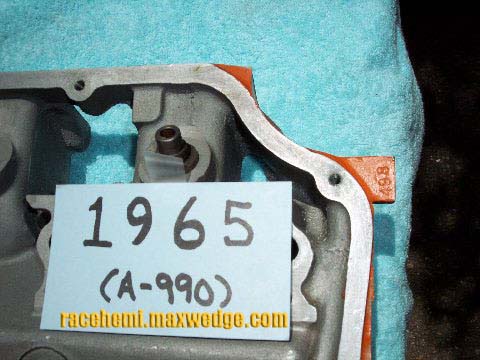 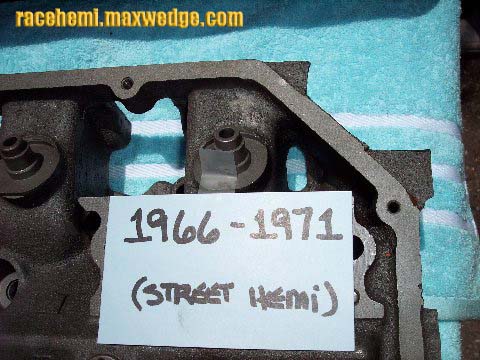 Notice the change from the curve to a straight line. It wasn't much of a change but it did improve clearance around the distributor. Also notice the alternator bolt support tab is even shorter. This is important to remember when the spacers you use to mount your alternator with don't quite fit correctly. You might have a spacer from a different generation head. 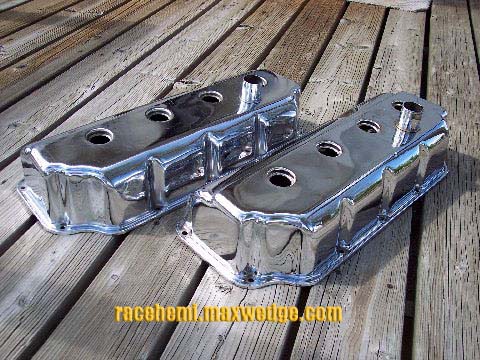 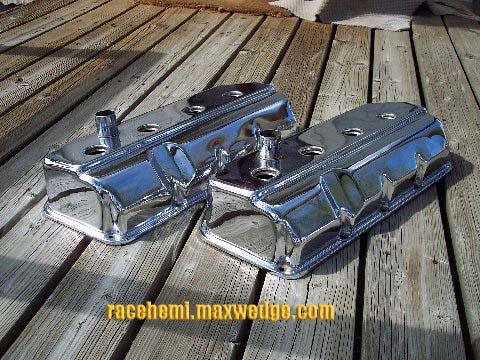 What you don't see in the two pictures above is that one valve cover should have two wiring harness fold over tabs on it across the upper portion of the flat area just above where the spark plug holes are. This would be for the passenger side valve cover to hold the ignition harness. These tabs were poorly spot welded on and they usually broke off after a few times of bending them open and closed when removing the wiring harness from the valve cover during valve cover removal for adjusting the valves.

Now you know what I know about the differences in 1964 and 1965 Race Hemi heads compared to the 1966-1971 heads. Hopefully you find this useful when restoring or cloning your car. The devil is in the details!