I received an email from a site viewer asking me about a cylinder block he had. He wanted to know if it was a Max Wedge block. Unfortunately based upon the information I have, I had to say it was not. Here is what I know about Max Wedge cylinder blocks. If anyone out there has more detailed information please let me know so I can post it and correct any mistakes I might have made in this posting.

In 1962 the Max Wedge used a block casting number 1852029. This was a truck block that was stronger than the passenger car casting, number 2120529. I have never compared the two casting number blocks side by side but I have been told the truck blocks were thicker casting making them a stronger block. The other thing I hear all the time is the 029 blocks were higher in nickel content adding strength. Original max wedge blocks will have a machined notch at the top of the cylinder bores on the exhaust valve side to accommodate the larger 1.88 exhaust valve. Without this notch, the valve would hit the block. Original Max Wedge blocks use two different size punch sets for stamping the identification numbers on the engine pad. The fonts are different for the punches as well as the abbreviations for engine size and performance level are different from regular passenger car engines of the same cubic inch.

In 1963 the block for the Max Wedge was changed to casting number 2406730. There are opinions that the very first 1963 Max Wedge engines used a 1852029 casting bored out to achieve a 426 inch engine size. I did see an 029 block a few years ago in California at a swap meet that was stamped as a 1963 426 Max Wedge and the stamps were the correct size, font and abbreviations so maybe that is true. for the most part though the 730 casting was the standard block for Max Wedge engines for 1963. Again I have been told this was a higher nickel block for added strength compared to the regular passenger car blocks. The new 730 blocks also needed notching at the top of the cylinder bores for exhaust valve clearance. It is worth mentioning at this point that the 426 single four barrel Street Wedge was not available for 1963. 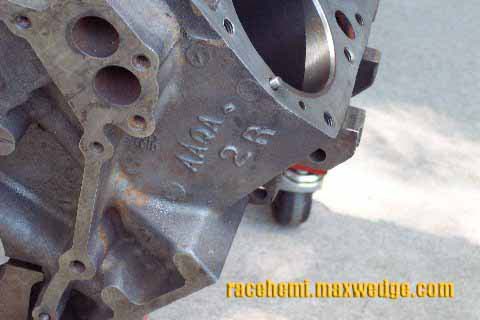 Note casting remarks, on all max wedge blocks. Sometimes the 2R is a 3R but most all of them I have seen are 2R's. I do not know what this means. The AAQA is always present. 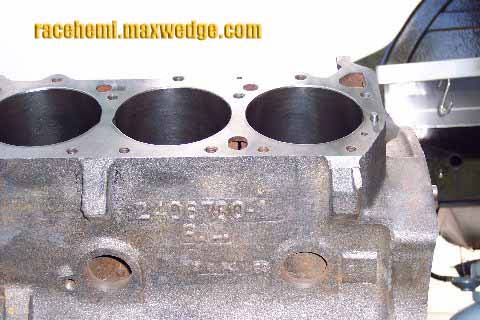 In 1964 the Max Wedge engine continued to use the 2406730 block castings. The block continued to receive the notching for exhaust valve clearance as they did previously. In 1964 Dodge and Plymouth began offering a 365 horsepower single four barrel 426 Street Wedge. This engine also used the 730 casting block except there was no need for notching the top of the bores for exhaust valve clearance as the Street Wedge did not use 1.88 exhaust valves so there was no clearance problem. I am talking about this Street Wedge block because many of the 730 blocks that come up for sale today are street wedge blocks. When you look at a 730 casting block or pictures of one be sure to look for the identifying notches if the block is represented as an original max wedge block. Chances are high it will not have the notches which means it is a Street Wedge block. The abbreviations and font sizes will also be different on a street wedge block.

Could it have been used as a replacement block for a max wedge engine? Absolutely. As best I can tell you, all Max Wedge engines installed in cars at the factory used the block casting with 2406730 on them, from the factory that is. I am only speculating here but it would be conceivable if you were some factory backed racer who blew up your motor that the factory could have sent you a 2532230 block as a replacement, but I wouldn't bet the farm on that.

There is also a dash number (-1, example 2406730-1 - see above picture) associated with the casting number. A (-1) indicates it was a casting mold set with all of it's original mold pieces. I don't know the exact number of mold pieces used to cast a block but it is several pieces. I have seen blocks with (-8) on them, indicating that particular set of mold pieces used to cast a block had 8 mold pieces changed out over time, probably due to fractures or chipped away parts of the definition on that mold piece. The dash numbers become important when you go to over boring a block for bigger pistons. A (-1) has the most consistent even thickness in the cylinder walls and other parts of the block. As you get into the higher dash numbers you stand a better chance of core shift which can lead to thin spots, in cylinder walls most importantly. This core shift can limit the amount of over bore without experiencing heating problems in normal engine operation and roundness strength for racers who depend on every bit of dimensional accuracy a race engine requires. You will usually find higher dash numbers in the later part a casting numbers history where the casting molds are more used up.

As I mentioned above all original max wedges have exhaust valve reliefs in the tops of the cylinder bores. They aren't very big reliefs but they are a must have on an original max wedge of any year. Exhaust valves were so big they didn't clear the block without this machining. If it doesn't have relief notches like in these pictures... 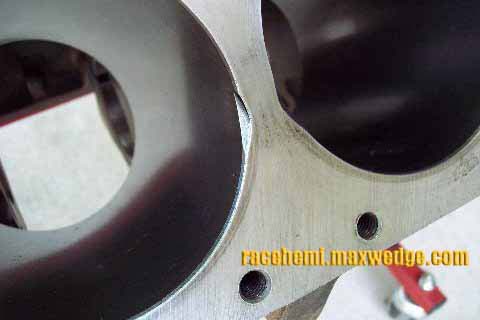 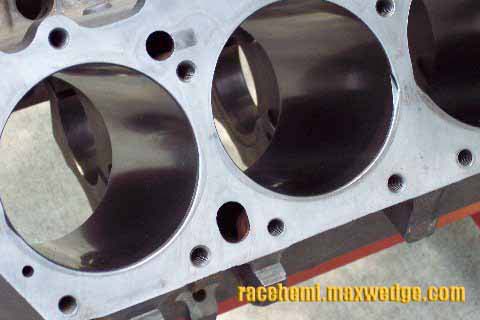 ...it wasn't originally a max wedge. Period. Keep in mind grinding clearances don't count as factory work. Only machining like the pictures above were done by the factory. If someone used a grinder to make these notches it is not factory and is most likely a street wedge block

None the less any 730 casting street wedge block will do fine if you are looking for a replacement block for an original max wedge or if you are fussing over the details on a nice clone car. Don't let the fact it was a street wedge block slow you down to much. As I have mentioned above discussing the different casting numbers, the important thing to consider is cylinder wall thickness. Original max wedge blocks were hand selected by sonic checking them for maximum wall thickness. A lot of 730 castings didn't have real great numbers for wall thickness so it is quite possible to get to thin with only a .030 over bore. Your only re-coarse there is to sleeve the thinner cylinders. I strongly advise before you plunk down good money on an old used block that you have a reputable machine shop sonic check the cylinders for acceptable wall thickness. Your machine shop will tell you what they feel is adequate wall thickness. I'm not saying sleeving is a bad thing though. I have racer friends that race engines with every cylinder sleeved and they are able to stand up to a pounding. Just keep this possibility and the extra expense of sleeving in mind when you are paying for your block. I understand most guy's selling their block have no idea what cylinder wall thickness their block have and it's a pain and additional expense to know these things but you really should know this before you buy. Even if you have to pay for the sonic check yourself. A block is either a viable piece for an engine build or it's a planter. Which one do you want?

If you are building an engine for an original max wedge car then casting dates and stampings on the pad by the distributor are important. Try not to get a casting date any closer than two months before your car was built. On the other hand I have seen block casting dates as much as a year before a car build so just make sure it is two months or earlier. Block castings would sit is groups so it would pretty much depend how they were pulled for assembly that would determine the closeness of the casting date to the build date. Blocks are not like milk so it's not like they had to rotate them for freshness. If the ones against the wall sat there as the ones up front were replenished I doubt they really worried much about it. That's close enough for accuracy purposes at a concurs judging.

If anyone has information contrary to this posting, I would love to see it. Accuracy is the priority on this site so please correct me if I am wrong. We are to early in the hunt for factual information to assume we know everything.