There are five variations of the Carter styled high volume fuel pumps we are going to look at that begin in the early sixties to date. There were versions before this but let's start with the early 60's to keep this as short as possible.

The first variation had an adjustable location bottom fuel inlet plate with a thick gasket, a deep body with three valves in it, a thick diaphragm, and upper bell. The means to attach the main body to the bell is a series of Phillips head screws. These screws come up from the bottom through the outer lip of the main body and up into the bell. I am sure you understand the basics of fuel pump construction but listen closely because the secrets are in the details.

These pictures are of the first of the 1960's series Carter high volume fuel pumps we are going to discuss. The fuel pump is an original 1965 A990 Race Hemi pump, Mopar part number 2585118 or Cater number 4024 with a date code of K4 - October 1964. This would not be a correct pump for a 1964 A864 Race Hemi which is Mopar part number 2581846. I have not found a Carter part number for this part number at this time so if anyone out there has some old Carter catalogs let me know. The castings however are most likely identical. Notice how the main body to bell screws line up with the bell casting seam. This is a real tell for a correct pump and necessary for proper clocking of your original fuel line. 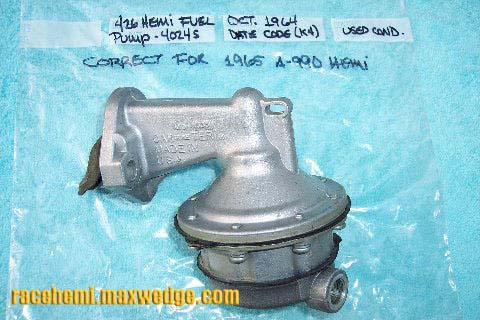 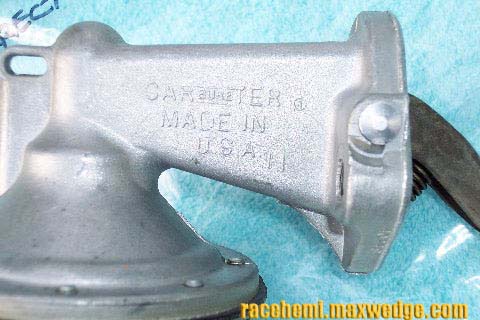 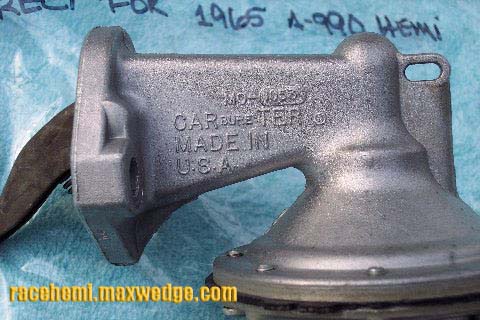 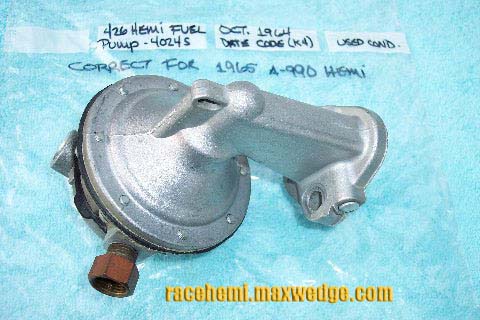 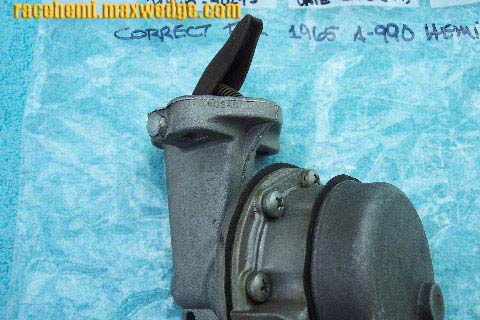 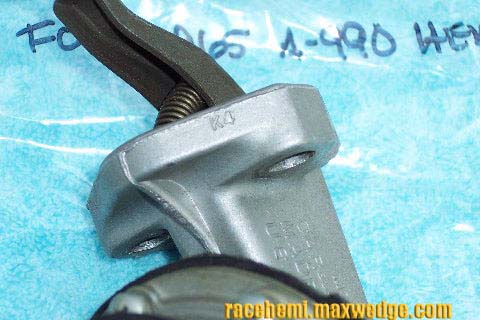 Below are pictures are of a second series Carter high volume fuel pump. The Mopar fuel pump, part number 2412466 or Carter number 3446S is original to all 1962-1964 413 and 426 Max Wedge engines. The reason I say this is a second series is you will notice a date code of M6 - December 1966 and a change in the casting remarks (lettering) configuration. With the later production date than the Race Hemi pump above, the changes in casting remarks make it a later series. Aside from the remarks change up this pump is correct in every way for the Max Wedge application. I know this is getting a bit overly detailed but for the guys doing the concourse cars this stuff is important. Notice how the MO-1053 is moved to the bottom compared to it being at the top in the earlier version. 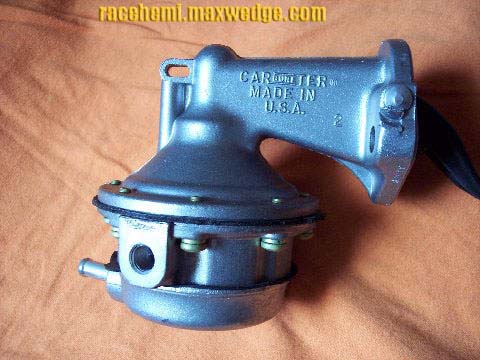 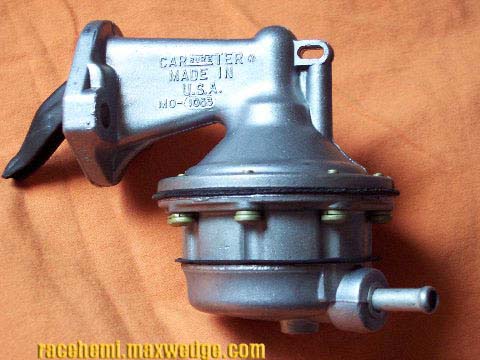 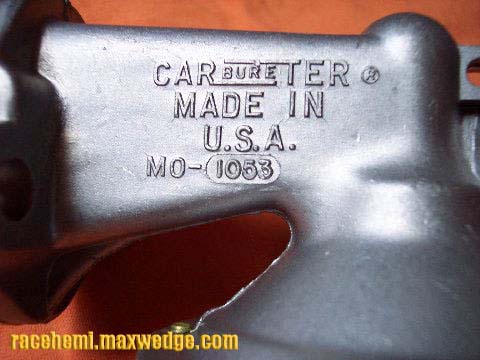 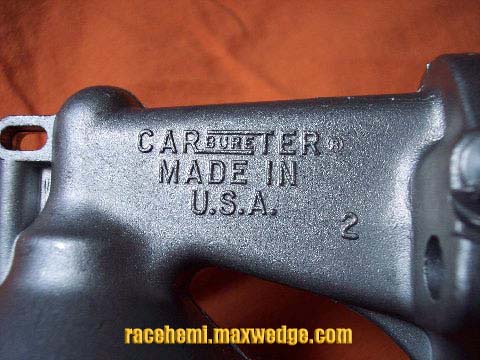 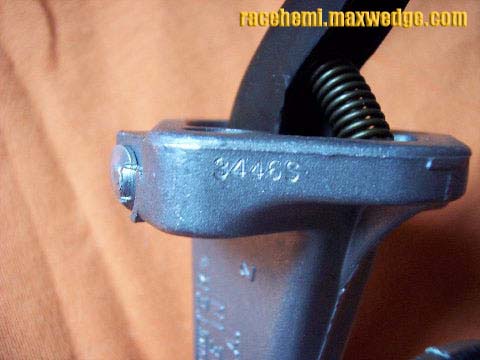 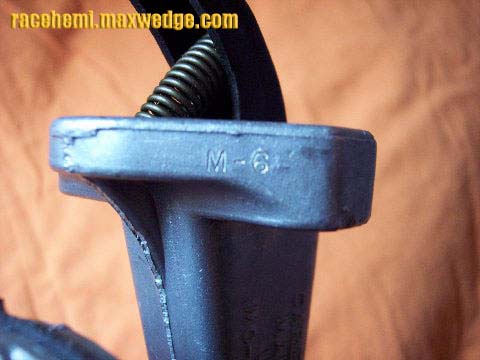 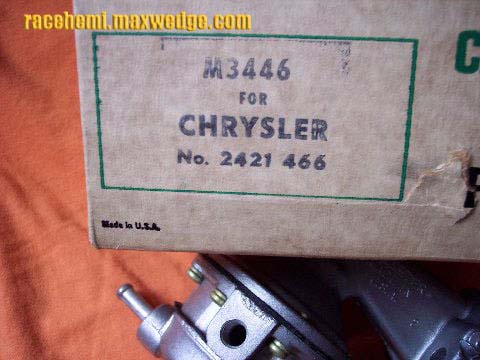 Next are pictures are of a third series Carter high volume fuel pump. The fuel pump is an original replacement 1965 A990 Race Hemi and Street Hemi pump, Cater number 4024 with a date code of D3 - April 1973. This pump is exact in every aspect except for a change in casting remarks (lettering) configuration. You will notice almost all of the lettering is no longer present like before and the word CARTER is only on one side in a different style. This doesn't really matter for the average driver or clone but these changes in casting remarks are how experts and judges separate the best concourse restored cars from the herd. This is the last series Carter pump to have the main body to bell mounting screws lining up on the casting seam. 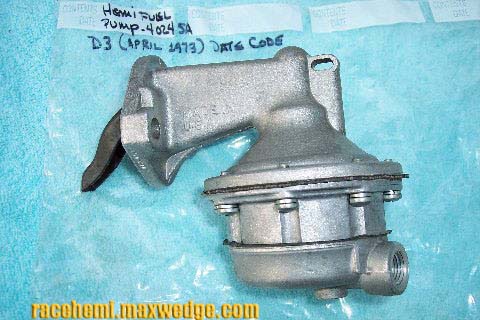 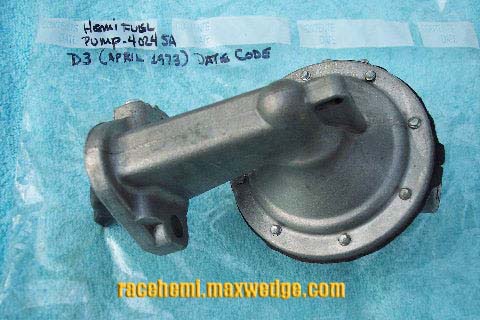 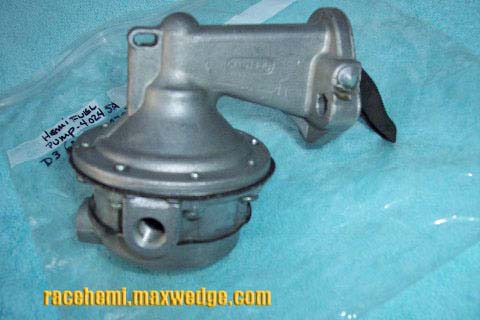 Next are pictures of the fourth series Carter high volume fuel pump. This is a universal big block Chrysler over the counter replacement pump. The part number is not important for our discussion here but the changes are important. Notice how the main body to upper bell mounting screws do not line up on the casting line. This change was common throughout most of the 80's and 90's manufactured pumps. The problem with this change is you will notice a slight change in the clocking of the main body in relation to the bell. This change in clocking causes the factory bent fuel lines to not line up properly and that causes fuel lines to not line up correctly on the top of the engine. What most guys did was bend the main line from the pump up to the top of the engine. That will work but it is difficult to do with stainless steel lines. You can do that but a person or judge with a sharp eye will usually catch the fuel pump body screws not lining up on the casting line. 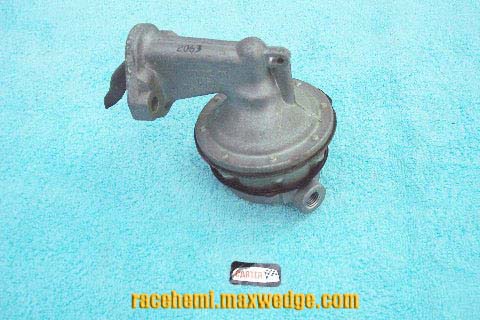 Lastly there is the current and fifth series you can buy today. This fuel pump has real noticeable changes compared to the earlier series. Regarding the main body to bell mounting screws not lining up on the casting seam issue and causing factory fuel line misalignment, what the new manufacturer (formerly Carter) did was add a second set of mounting holes to the bell. With this change you can re-clock the main body to get proper fuel line alignment. Only problem here is you still have that extra set of holes that were never present in any previous configuration of this fuel pump. You could probably fill the extra holes with putty and paint the pump silver which would hide this problem but there is one more problem with this pump bell. It also has a huge bump on the side of the bell that is easy to spot. I have never had one of these pumps apart so I don't know what the back side of the bump looks like regarding thickness. If you were to try to grind off this bump off you might end up with a hole in the casting and ruin the pump. The pump in this picture is not for a Chrysler big block but it is exactly the same with the exception of the pump actuator arm. 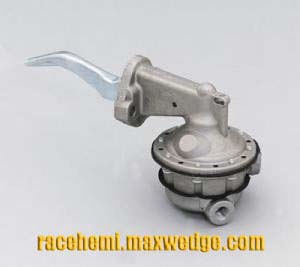 Will this pump work? Absolutely. Is it noticeable? Absolutely. You will have to decide how important this appearance issue is to you personally but for sure it won't pass an inspection in a judging situation. The other thing is that invariably you will get someone that wants to be an expert in front of a crowd that will bring these deviations in accuracy to your attention while people are standing there enjoying your car. You might not mind it all that much at first but trust me, after a while that type of scrutiny gets old real quick.

Now you know what I know about fuel pumps regarding appearance changes. If you find any information to the contrary please let me know so I can update this information.